You are here: Home › Medieval tapestries › The Lady with the Unicorn tapestries 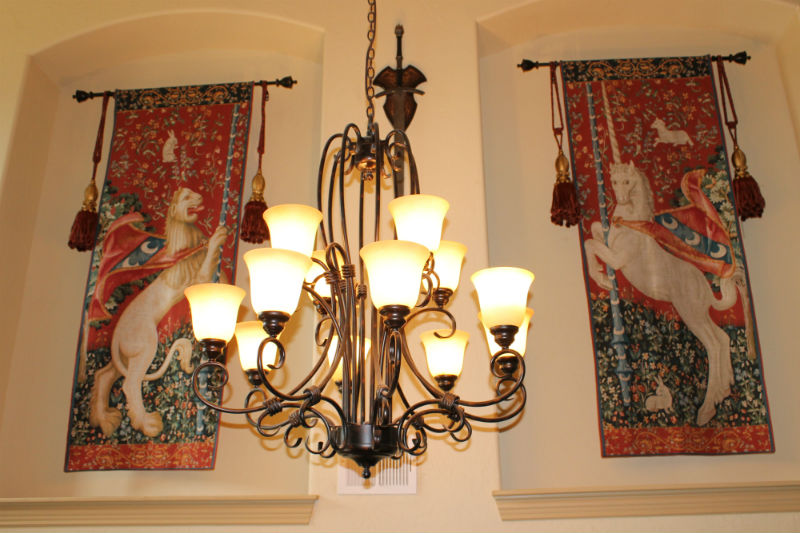 The Lady with the Unicorn tapestries exhibit in the Cluny Museum is one of two places I know in Paris which bring a sense of awe to all its visitors. The other is Sainte Chapelle, the 13th century Gothic chapel with its soaring stained glass windows. Both inspire silent admiration.

Why are these are the most popular of all medieval tapestries? Is it their creation, history, imagery or beauty?

Creation of The Lady with the Unicorn tapestries

The cartoons (original designs) for the tapestries were made in Paris and then they were woven in Flanders from wool and silk, probably in about 1511. The banners on each tapestry show the arms of Jean le Viste who was in the court of King Charles VII. The limited range of colours adds to their cohesive visual strength but is due mainly to the limitations of the time. Dyes were extracted from plants and insects in a range of less than twenty colours: such as red came from madder, pomegranates or poppies, and blue from woad. (Woad was so profitable in 16th century France that importing it from the East was punishable by death: extreme protectionism!).

History of The Lady with the Unicorn tapestries

Forgotten and lost, the six tapestries were discovered in the Chateau of Boussac in 1841 by the writer Prosper Mérimée in a poor conditions caused by dampness and rats. The novelist George Sands saw them three years later and drew attention to them resulting in their acquisition by the Musée de Cluny in 1882. A poor restoration was made of the damaged lower portions causing the dyes to fade soon whereas the original colours have withstood the centuries.

Imagery of The Lady with the Unicorn tapestries

Five of the tapestries feature the senses – taste, smell, sight, hearing and touch. The sixth has the enigmatic words “A Mon Seul Desir” written on the tent. These may translate literally as “To my only love” or “My sole desire” but what do they mean? Interestingly, this is the only tapestry where the lady smiles. Is she picking up or putting down the necklace; does it matter?

All the tapestries show a unicorn on the left of the beautifully dressed lady and a lion on her right; unicorns represented purity and lions strength and valour. Some scenes include monkeys, rabbits and birds. Each is set within a mille fleurs (thousand flowers) background of small flowers many with attributes and meanings commonly understood at the time. Such mille fleurs tapestries were the dominant style of late 15th century French weaving.

The Lady with the Unicorn tapestries today

These national treasures of France are stunningly displayed in their own circular room at the Musee National du Moyen Age (Cluny Museum), recently renovated. This is my favourite museum, with its wide ranging collection of remarkable medieval art. Do visit it if you are in Paris. Today these tapestries have inspired musicians and authors and caught the imagination of many in the Harry Potter films.

There are over 40 versions of The Lady with the Unicorn tapestries on our website, some in several sizes, from European weavers. Some feature the full tapestries, others focus upon details. All are fully lined and have a rod pocket – we supply hanging information with each order.