You are here: Home › Art Tapestries › Tapestry Art › The Luncheon of the Boating Party tapestry 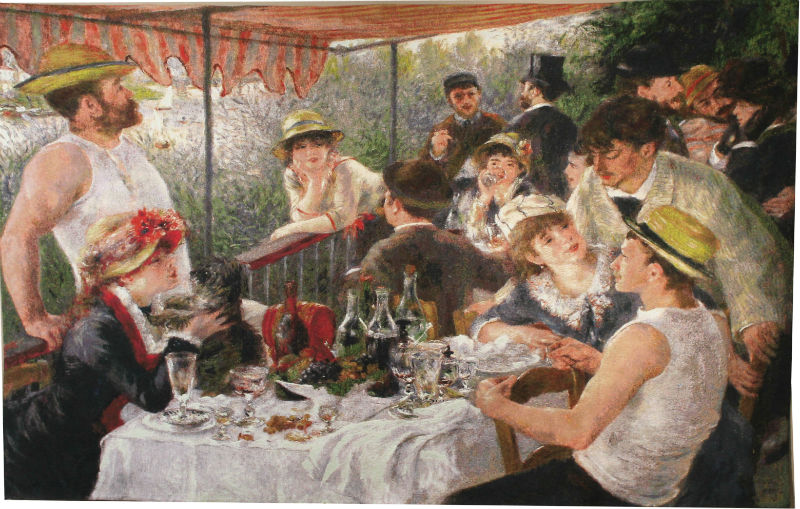 It can be a pleasant surprise when disparate things converge unexpectedly in our lives. This happened recently for me with a carving, a book and The Luncheon of the Boating Party tapestry.

My wife was asked to drive an old lady to a family gathering in Vancouver. Not wanting to drive in the “big city” she commandeered me as driver. On our return to the lady’s house she invited us in to follow up our conversations. Her home contained an eclectic selection of art gathered over her long life. In a glass cabinet was a carving, a netsuke, which she invited me to hold. It was exquisitively carved in an ivory-like material. She enthusiastically recommended that we read a book about netsuke, The Hare with Amber Eyes.

What a delightful, well-written book it proved to be, tracing the stories surrounding a collection of netsuke owned by a Jewish banking family, the Eprussi. Although the Nazis took everything the hidden carvings remained safe. One member of the family featured in the book seemed notable for his character, a man I would have like to have met; Charles Ephrussi.

Charles Ephrussi (1849-1905) devoted his time and resources in support of artists; an art patron with a human touch. He collected about 40 Impressionist paintings, and built up a collection of over 200 netsuke. Pierre-Auguste Renoir was among his friends and it’s a pleasure to spot Ephrussi amongst Renoir’s artistic friends in his highly regarded Le déjeuner des canotiers painted 1880-81. He is the man at the back wearing a top hat. Also, note the girl playing with a small dog: Aline Charigot, a seamstress Renoir would later marry.

The Luncheon of the Boating Party tapestry? This has been woven to splendidly reproduce the painting, drawing together the threads of this pleasurable convergence. It is one of many Impressionist tapestries including reproductions of Renoir paintings.

Oh to have been in Paris at this time, during the Belle Époque from Impressionism to Art Nouveau, a high period of French art and music, and to have been at the 1889 World’s Fair which included the opening of the Eiffel Tower.