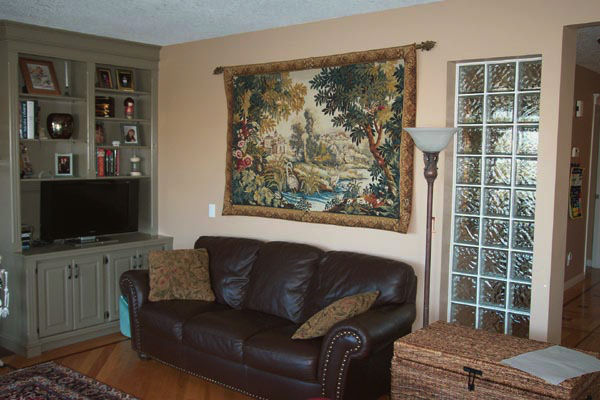 Verdure tapestries have a timeless appeal with their peaceful natural settings.  The term “verdure” is derived from the French “vert”, translated as “green”, reflecting the lush greenery common to them. Forests and woodlands, sometimes with winding streams and lush green vegetation, set the scene.

They were first woven in the 16th century, hence after the time of Raphael when the artistic interpretation of perspective was introduced (he died in 1520). The style was adopted by weavers in Paris, the Loire valley, Flanders, Brussels and the southern Netherlands.

Unusually, one series was woven in England. In 1619 James I brought 50 weavers from Flanders to work at the Mortlake Tapestry Factory established by Sir Francis Crane. Here, on the banks of the River Thames, elegant tapestries were woven for the royal courts of James and of his son Charles I. The royal motive was probably a desire to have their own tapestry weavers: why should the French court have them and not the English?  (Similarly, Flemish weavers worked in St Petersburg.)

To the left is our most popular verdure tapestry. The Forest of Clairmarais tapestry was woven in Flanders in the early 17th century. Now it is superbly woven in France in 95% cotton; definitely an heirloom piece. It is available in several sizes, one without the border, all lined with a rod pocket. As a classic verdure tapestry it conveys a natural setting, usually partly forested, incorporating peaceful vistas of trees, plants, water and sometimes hills.

For a soothing piece of art verdure tapestries are hard to beat provided that the style fits within the setting of your home. We have over 40 different designs for your selection.