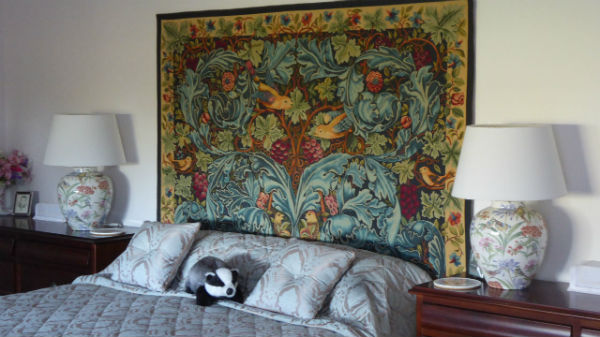 Tapestry weaving in England sounds initially odd since England is hardly synonymous with tapestry weaving … unless you consider William Morris. However, there is more to the story than meets the eye.

During the medieval period, royalty and aristocracy valued tapestries so much that they would take them with them during travels within their domains to be set up in the court of their current residence. It is not surprising that the presence of status symbols such as these would lead to European monarchs wanting them in their own courts. Even better, they wanted them woven in their own countries; their own tapestries. They conveniently ignored the facts that Flemish weavers were responsible for every creative aspect. These alternative weaving venues included Copenhagen, Stockholm, Madrid and St Petersburg. English kings were no exception.

In 1619 James I established the Mortlake tapestry weaving workshops on the River Thames importing weavers from Flanders. Nonetheless, the Flemish weavers continued with the design styles with which they were accustomed, so no English style resulted. Royal patronage of them continued under Charles I. The Commonwealth under Cromwell naturally disapproved of such flamboyance and then Charles II showed little interest so the factory closed in 1703. In this same period a private workshop wove tapestries in Soho with Chinese and Indian influences. Only in the latter 19th century did tapestry weaving in England resume. Two very different styles resulted. The Royal Windsor Tapestry Manufactory was established in 1876 by two Frenchmen and staffed largely by French weavers from Aubusson. Starting with two low warp looms they grew to using 16 at the factory’s closure in 1890. They obtained significant support and patronage from Prince Leopold, Queen Victoria’s youngest son, until his sudden death in 1884.

Their tapestries were dramatic in the French style. In 1878 they won a gold medal in Paris for a series of eight tapestries, the Merry Wives of Windsor. Intriguingly, the set disappeared, re-emerging at an auction in the 1970s. Queen Victoria commissioned designs and used the Royal Windsor Tapestry Works to repair tapestries in the royal collection. However the factory never broadened its clientele beyond royalty and the aristocracy.

It was to take a different tapestry workshop, with very different ideals and styles, to attempt to do this: Morris & Co. William Morris was the energetic visionary behind Morris & Co and the leading light of the Arts and Crafts Movement in Great Britain. In 1878 he visited Aubusson and described the weaving there as ‘a decaying commercial industry of ..rubbish‘. So he set about weaving himself and had a high-warp loom of the medieval style built in his bedroom. At the beginning of each day he taught himself to weave from an 18th century French craft manual.

Morris & Co was a collaborative company of artists including Edward Burne-Jones who was responsible for many Morris & Co tapestries. He sometimes partnered with William Morris – Burne-Jones designing the figures and Morris the background which Morris & Co wove at Merton Abbey. Today we have an extensive selection of these Arts and Crafts tapestries. Examples are Acanthus and Vine (1879), The Woodpecker (1885) on the left, Flora (1885), and the “Holy Grail” series of the early 1890s.

Despite Morris’s enthusiasm for socialism in his later years the company was never able to make their hand-woven tapestry masterpieces accessible to the average person’s purse.

From now on tapestry creations were in the hands of individual artisans working heir craft to produce one-off designs generally on a small scale, for tapestry weaving is time-consuming. A notable exception is the 75’ high tapestry of Christ in Glory in Coventry Cathedral.