You are here: Home › Art Tapestries › Monet and Modigliani – contrasts in life and art 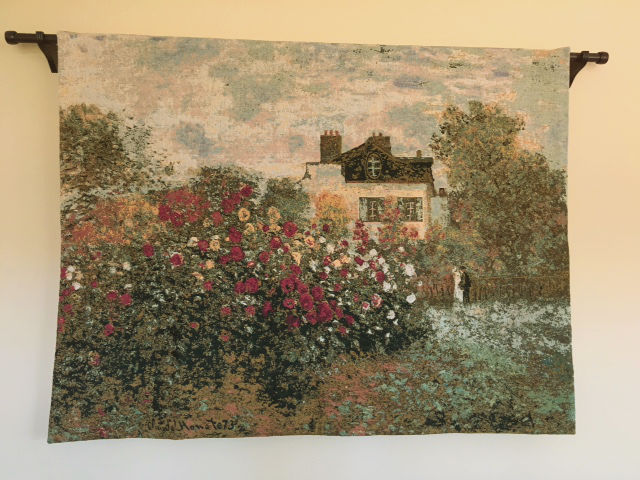 One of our French tapestry weavers has just released the first ever tapestries of a Modigliani painting. Noting that Modigliani and Monet died within a few years of each other it seemed interesting to explore the similarities and differences between these two contemporaneous artists. Both were strongly influenced by the Parisian art world and both rejected art of the establishment in their differing ways. Yet how different they were.

Amedeo Modigliani was born in 1884 and died of tuberculosis in 1920, aged only 35. In 1903 he moved to Venice where the themes of his future life took root: art, alcohol and drugs, women and continuing sickness. Three years later he settled in Paris where these aspects of his life took full rein in Parisian bohemian artistic society.

In a Montmartre commune his lifestyle deteriorated from having a dapper appearance, drinking occasionally and writing home regularly to becoming an alcoholic and drug addict whose life was falling apart. His rejection of the past extended to destroying many of his early works. Influences on his art progressed from Henri de Toulouse-Lautrec to Paul Cezanne. A series of nudes resulted in his only exhibition in 1917, but it was closed by the police on the first day on obscenity grounds. That year he met Jeanne Hebuterne, the model in this, the first of our Modigliani tapestries: Portrait of Woman in Hat. Sadly, she threw herself off a balcony the day after Modigliani’s death.

Woman with a Black tie, which hangs at the Musee de l’Orangerie, is also available as a French tapestry.

Why is it that so many great artists have such extreme personalities and succumb to such troubled minds? Vincent van Ggh comes instantly to mind. It’s as if aspects of their personalities are intensified. This often seems to result in more intense, inspired art. Thankfully, this is not a requirement – as illustrated by Monet.

Claude Monet was born in 1840 and died in 1926, aged 86. His art turned away from established styles after 1862 while studying in Paris. With Renoir, Sisley and others, he began painting en plein air, concentrating on the perceived effects of sunlight; later termed Impressionism. These translate superbly into Impressionism tapestries, with the soft weave bringing the brushstrokes to life.

The first Impressionism exhibition of 1874 included his Impression, Sunrise. Like Modigliani he frequently painted his loves, in this case his wife Camille until her death from tuberculosis in 1879. In 1883 he moved to Giverny with Alice Hoschede whom he later married. They raised their combined eight children in a setting where Monet had a fulfilled life painting his garden, lake and surrounding nature in the Seine valley. Over 1,100 paintings are attributed to him. I can never escape a mental picture of a rather cuddly looking man with a bushy beard sitting at an easel before lovely scenery. Am I sentimental? Nonetheless, this is such a stark contrast to sad Modigliani.

Whatever you preferences might be for art of the late 19th and early 20th centuries it is heartening to know that we have wall tapestries available reproducing some of these highlights: not just Monet and Modigliani, but also Renoir, Van Gogh, Degas, Cezanne, Gauguin and also many of the Art Nouveau masters Klimt and Mucha. See over 70 Impressionist and related tapestries and nearly 50 Art Nouveau tapestries.